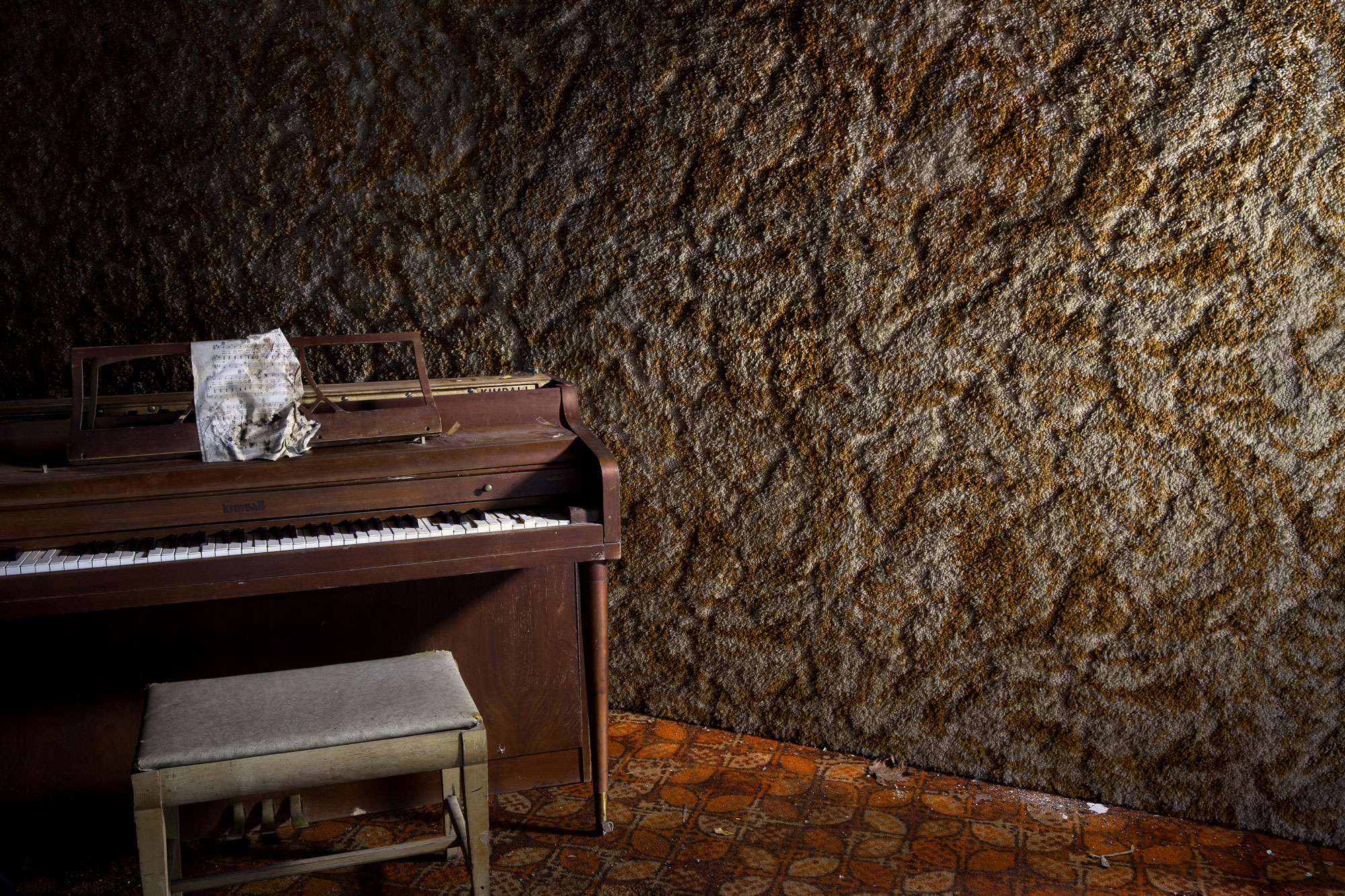 I maintain a fine arts practice in addition to my commercial photography studio.  This particular image, ‘Piano, Penn Hills Resort’, has been included in several exhibitions.  It is a part of my series Tracing Like Fingers.

A previous image that I posted, ‘Ice Skates, Penn Hills Resort‘, was photographed at the same location using the same lighting techniques.  While ‘Ice Skates’ is one of my favorites, ‘Piano’ is a favorite as well.  Keep in mind – this resort closed in 2009, and the shag carpeting on the walls was how it looked in 2009.

It is truly an incredible time-capsule.  The text below is largely copied from ‘Ice Skates’.  It both gives background on the location, and gives some explanation about the lighting used for the images.

Some Background on the Location

This images was made at Penn Hills Resort, an abandoned honeymoon resort located in the Pocono Mountains of Analomink, Pennsylvania.  This is a location that I have visited many times, and I have made several photographs there.

Penn Hills was open from 1944-2009.  Originally opening as a tavern, by the 1960’s it had expanded to include guest suites, tennis courts, archery, an ice skating rink, and a pool shaped like a wedding bell.  Catering to couples and honeymooners, the guest rooms featured floor to ceiling carpeting, heart shaped bathtubs, and round beds.

In 2009, the co-founder died, and the resort closed two months later.  With over $1 million owed in back taxes, Monroe County took over the property.  With no funds for upkeep or updating, the resort was in disrepair and heavily outdated.  Once abandoned, copper thieves, vandals, flooding, and fires further accelerated the resort’s physical decline.

The image was lit with a lite panel using a technique called light painting.  Light painting involves using an off-camera light.  The idea is to cast and rake light across surfaces at particular angles to reveal texture and detail on surfaces.  The greater the angle you place your light, the more detail is revealed.  The lesser the angle (closer to the camera axis) you place the light, the flatter the light becomes, and less detail is revealed.

While anything can be used for light painting – a call phone, flash light, video light, or even a strobe – my personal favorite way to approach light painting is through the use of a video lite panel.  This is the panel I have – it’s not particularly fancy.  Others have a bi-color capability, meaning that the color temperature can be adjusted.  This does not have that feature.  But it does have barn doors, and the ability to operate off a Sony V-mount battery.  So it’s extremely portable and can fit in a backpack.

When light painting, I’ve found continuous light to be much easier to use than a flash.  You’re able to see your results in real time and instantly make adjustments.  And the size of the panel I have (it’s one foot by one foot) means the relative size of the light to the surface is rather large.  This results in nice, soft light.